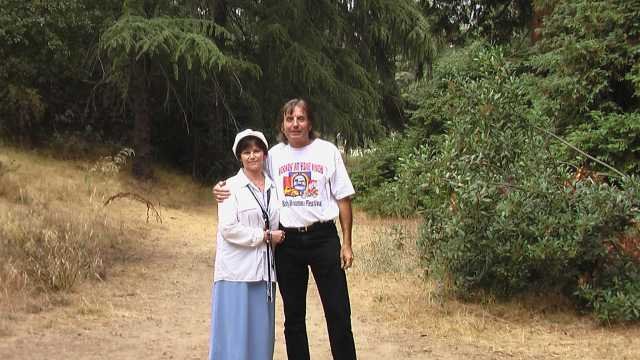 Honus and wife Debby down the Andy Griffith Path in Beverley Hills, California

Honus Shain, the playwright, is also the manager/producer of the Pine Knob Theatre, Inc. This Kentucky Outdoor Drama built in 1987 was also the design of  Honus Shain.  Born and raised in the rural community of Pine Knob, Ky., the happy memories of his childhood in the community have led to the five plays being performed each summer. "Dock Brown-Legend of an Outlaw" was the first play to be performed at the Theatre and is the true story of the outlaw who actually lived in Pine Knob from 1842 to 1851. Honus now lives on the farm once owned by the outlaw and the Theatre site is a part of the farm.  The plays actually take place on the historic site.  Being raised in the community, Honus has always heard stories about Dock Brown and with the aid of Col. William R. Haynes' Book, Dock Brown Outlaw of Grayson County, he was able to bring the story back to life.  His second play, "Down in Hoodoo Holler" and "The Return of Goldie Mae", are comedies stemming from his childhood memories and the folklore of the community.  His great love for the 1950s and his admiration for 50s vintage cars, brought him to write two 50s-60s plays, "Daddy Took The T-Bird Away" and "LARD - Lucy and Ruth's Diner."

Honus is a former radio broadcaster, at one time owning four different commercial radio broadcast stations. Now residing at his home in Pine Knob, he enjoys writing and producing plays for the Theatre. He also spends much of his time restoring Pine Knob buildings and grounds for visitors. Each summer numerous picnics, family reunions, and weddings are held on the grounds. His character in "Dock Brown" is that of his fourth great-great grandfather, Mark Shain. Many other members of the cast are descendants of the characters they play.  Honus is also a story teller and is the comic relief  for all the plays.  Prior to each performance, a number of humorous stories are told about his childhood.  Honus also speaks at banquets and various meetings.